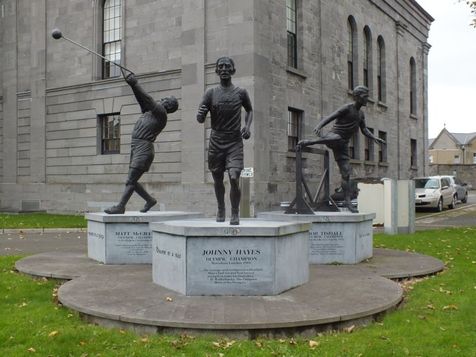 Left - Matt McGrath, Hammer :  Silver 1908 London, Gold 1912  Stockholm, Silver 1924 Paris
Centre -  J.J. Hayes, Marathon :  Gold 1908 London
Right -  Bob Tisdall,  400m Hurdler :  Gold 1932  Los Angeles
The club's history stretches back to its foundation in 1955 when...
"On the Monday night, November 21st, eight met at the house of one of the number and took a very bold decision; to form a new Club, which they named Nenagh Olympic. The meeting lasted from 8 pm to 2.45 am and a tired octet emerged wth a Club, a Commmittee, a Constitution and Crusade"
The 1955 founding fathers were: Donal Murphy (chairman), Sean Naughton (vice-chairman), Liam Gleeson (hon. secretary and vice-captain), Jackie Gleeson (hon. treasurer), Michael O'Connell (captain), Gerard Lewis, Vincent Tierny and Olainn Dempsey.  Later co-opted were Pat Naughton, Ned Fogarty and Tom Carroll. The original members were inspired by the achievements of the three Olympic champions with origins in and around Nenagh and from these three Olympians came our club crest of three intertwined Olympic rings in our national colours.

From its inception, the club went from strength to strength culminating in winning the Drifter Cup for top juvenile club in Ireland six years in a row from 1977 to 1982 - an incredible achievement. The club remained a force at national level throughout the Eighties also and this was reflected in scores of international appearances for our athletes throughout both of these decades.

As a juvenile force the club went into decline in the 90's, while those who had progressed to senior level excelled.  This was the most successful period in modern years with a number of successes in Midland and National Leagues for both men and ladies.  The men's team were second top club in the country in both 1995 and 1996 and the ladies had the incredible achievement in 1997 of being top club in Ireland. As a result, they went on to represent the country in the European club league, held in Holland that year.  The club dominated the Midland league in the 80's, winning in nine out of ten years.

The pinnacle of our club's success came when two of our number followed in the footsteps of  Hayes, McGrath and Tisdall in representing their country at the Olympic Games, namely Neil Ryan (100m 1996, Atlanta) and Gary Ryan (200m 1996, Atlanta & 4x100m 2000, Sydney). While they shared the same surname, they were not related except in their considerable sprinting ability and both garnered many Irish titles and records as a result.

Gary also has the proud distinction of being the only club athlete to hold a world championship medal, being a member of  the Irish 4 x 400m relay team which won bronze at the 2004 World Indoor Championships (along with teammates Robert Daly, David Gillick and David McCarthy).

The “second coming” of the club came about in 2003 when a small group of ex Nenagh Olympic athletes, recognising the decline of the club, set about recovering it’s glory days under the original club constitution. From modest beginnings with small athlete numbers, the club has flourished once again in the intervening decade to be among the top athletic clubs in Munster boasting nearly 400 members. Twice in the last three years Nenagh Olympic has been the top indoor club in the province, a testament to our athletes, coaches, committee and indoor complex, which is still one of only two in the Republic. Over the last number of years, our share of National medals is increasing on a consistent basis (35 in the last calendar year) and six of our athletes have represented their country this season.

This article highlights some of our major achievements but only succeeds in scratching the surface when it comes to National and Provincial medals won by a host of talented athletes. None of this incredible success would have been possible without the input of dedicated coaches and hard-working volunteers past and present.  It is hoped to pay tribute to some among those when a fuller version of the club's history is provided at a later date.

-------------------
Notes:
1) The above quotation, originally from 'Nenagh Ireland's Town of Champions', appeared in an article 'Thirty Five Years A Growing ', written by the late Tom Holmes.  The article was one of many in the souvineer program of the club's Grand Opening Invitation Meet staged on Sun 23rd Dec. 1990 to mark the official opening of our indoor athletic stadium.
2) A 2012 Nenagh Guardian article Nenagh and the Olympic Games details much of the story of the town's three Olympians of the last century.